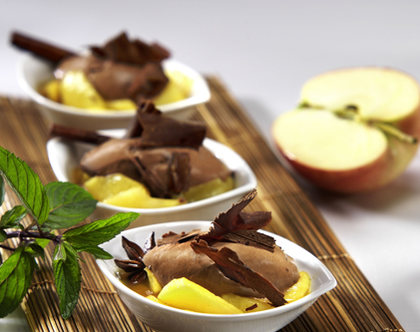 Soft, sweet and sensational …The classic seduction of chocolate coupled with the seductive newcomer, the Kanzi apple, in a soft, sweet and irresistible dish:Kanzi compote with chocolate mousse.

Melt the chocolate au bain marie. Mix the egg yolk and vanilla sugar in another bowl and warm it in another bain marie. Beat the egg yolk and the vanilla sugar until you have obtained double the volume. Fold through the melted chocolate, add the rum and the ground cinnamon. Stir until you have a smooth mixture and let cool to room temperature. Beat the cream until peaks form and then fold through the chocolate mixture. Chill the mousse for two hours in the refrigerator.

For your compote:
Peel the Kanzi apple and chop or slice it. Pour the sugar into a saucepan and heat over medium heat. As soon as the sugar turns golden brown, add the
Kanzi slices or cubes and pour over the apple and orange juice. Add some star anise, a cinnamon stick and the halved vanilla stick and reduce the mixture by half.
Finally add the dissolved potato starch and stir through properly. Chill the compote in the refrigerator. Serve the compote with the mousse.